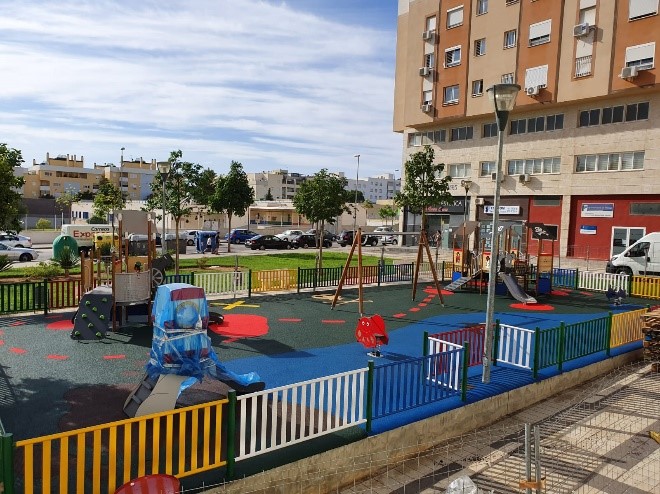 The City Council has awarded CONTENUR the installation of various playgrounds in the capital city of Malaga province.

In addition, a multi-activity play area has begun to be installed in Linear Park with a substructure equipped with five towers, a wavy slide, a kitchen balcony, a store counter, a clock game panel, a helm, a rotating play panel, a star play panel, an access ball bar, a ladder and a set of thermo-galvanised climbing chains that are lined with polyurethane.

In addition to the restoration and set up of an existing multi-activity play area, this children’s play park will have as an added bonus a substructure consisting of a small house with an access platform, an inclined walkway, a curved balcony and two linked towers with slide exit, an abacus play panel, a counter, a game of chance, a manual skill panel, a telescope and two intercoms. The continuous rubber cushion surface will cover an area of ​​220 m2 and will consist of 50 mm of SBR and 10 mm of EPDM.

Another of the new areas that will have a CONTENUR playground will be the Adolfo Suarez Pipi Park that will have a large castle on a hill made of aluminium and HPL (High Pressure Laminates) as well as two huge stainless steel slides.

Together with these projects completely renovating and creating new playgrounds for the Parks and Gardens Service of Malaga City Council’s Environmental Sustainability Area, CONTENUR is responsible for the daily maintenance and cleaning of the more than 400 playgrounds located in the 11 municipal districts. It should be noted that in the last two years our teams have installed and/or restored almost 100 playgrounds in accordance with European regulations.

Any cookies that may not be particularly necessary for the website to function and is used specifically to collect user personal data via analytics, ads, other embedded contents are termed as non-necessary cookies. It is mandatory to procure user consent prior to running these cookies on your website.